The Shroud Maker – Friday, 15th February @ 7.30 – Volcano Theatre, Swansea. Pre-book tickets online at http://www.volcanotheatre.co.uk or purchase on the night. Play followed by Q&A with the writer and actor. 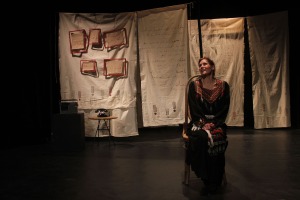 What’s the best business one can establish in Gaza? Haj Souad, an 84 year old woman living in El Shujaia Neighbourhood, had the right idea. She has survived decades of wars, deportation and oppression through making and selling shrouds for the dead, profiting from the continuous Israeli attacks.
A compelling black comedy, The Shroud Maker delves deep into the intimate life of ordinary Palestinians to weave a highly distinctive path through Palestine’s turbulent past and present. Loosely based on a real life character still living in Gaza, this one-woman comedy weaves comic fantasy and satire with true stories told first hand to the writer, and offers a vivid portrait of Palestinian life in Gaza underscored with gallows humour.

Ahmed Masoud is a writer, director and academic. Born and grew up in Gaza, now based in the UK and author of Vanished: The Mysterious Disappearance of Mustafa Ouda. His plays include Camouflage (London, May 2017), Walaa/Loyalty (London, June & November 2014), Unto the Breach (London, November 2012 & Vienna, November 2013) and Go to Gaza, Drink the Sea (London, 2009 & Edinburgh Fringe, August 2009). His radio piece Escape from Gaza was broadcast on BBC Radio 4 in 2011.

Why has West Wales Friends of Palestine brought the Shroud Maker to West Wales?

This year we invited three personal friends from our twinned village of Rummaneh to visit us, in return for their hospitality to us. All their visas were refused, though they have homes, families and work in Rummanah and no desire to leave. So, we are bringing a play from Palestine to Wales until we can bring our friends to meet you.

Join Us for an Unforgettable Evening.